There was an excitement in the air this morning because for the first time since starting the trip we were going into a town! We could've easily hitched to Bend from Elk Lake a few days back but decided against it since we'd both been there many times before. Instead, we opted to go check out the small town of Sisters! I had never been there before but was excited to scope out a new part of Oregon. The tiny town stops are my favourite!

We walked 1.5 miles to highway 20 and prepped for a morning of hitchhiking. This would be our first hitch of the trip! It wasn't but a mere 15 minutes later that we were jumping into a pick up truck with a nice fellow from Redmond. He had to go through Sisters on his way home and was happy to give us a lift. He was a retired correctional facilities counsellor and judging by the raft he was towing behind his truck, was quite the outdoor enthusiast. For some reason knowing he also enjoyed spending his spare time in nature made me feel safer.

We got dropped off outside this very trendy coffee shop and found our place on one of the outdoor picnic tables. Peter took advantage of the wifi while I went in and ordered us some breakfast frittatas and coffee. We spent the next couple of hours here, eating pastries, drinking coffee, and charging our devices.  It was obvious that Sisters is an active community and there were lot's of bike commuters dressed up in office attire coming and going from the coffee shop. I was very enamoured with the town and wanted to live here immediately.

We had a little issue we had to problem solve while we were in Sisters and that was getting around a 23 mile trail closure. Getting around it was proving to be quite complicated. Our goal was to miss the least amount of trail as possible which meant getting off at Pamelia Lake and getting back on at Ollalie Lake. This option was also the most difficult logistically because neither of these trail heads were off main roads/highways which would make hitching near impossible. Most hikers were opting for easier drop off points but this also meant missing significant sections of trail. Peter put a post up on the Central Oregon Trail Angels Facebook page asking for help to get around the closure. Luckily. a trail angel and avid thru-hiker Devilfish offered to take us to exactly where we wanted to go and he was available to do so the next day at 1pm. This meant we had to hitch back to the trail head this afternoon, hike as many miles as possible (ideally 17 miles) before nightfall and hike another 15 or so the next day before 1pm. Cool cool cool...

As with every town stop our next goal after eating was to find the laundromat. Luckily the town is quite small and it was only a few blocks away. We quickly discovered they were all out of soap and Peter sent me to get some. However, all the places I went to were either closed or had closed down permanently and I had no choice but to go ask a friendly neighbour. The first door I knocked on went unanswered so I walked down to the next block and found a really nice older man who was in the midst of setting up his home veggie stand. As he went to gather some soap I looked over the veggies and picked out a beautiful field cucumber to buy. I figured that would be a nice trade off for his kindness and a bonus for us considering we hadn't been eating many vegetables! 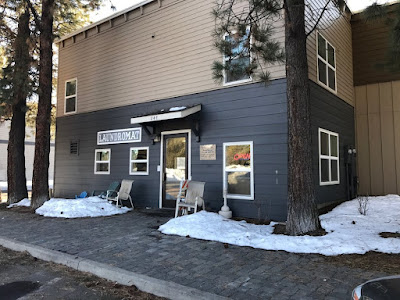 While Peter watched over the laundry I went to the local campground to have a shower. One of the funny things about doing laundry is you need something to wear while you're washing your clothes. This typically meant wearing your rain pants and jacket or sometimes I went Survivor styles and wore my buff as a shirt. It was a beautiful sunny hot day and here I was walking through the streets of Sisters, Oregon in a long sleeve merino shirt and rain pants that were rolled up to my knees. I was desperate for some shampoo and conditioner but couldn't find any little bottles to buy anywhere. I almost started asking campers in the campground but that felt like too much. I think I paid $1 for 2 minutes and judging by the way the water pressure nearly knocked me off my feet, it was all I needed. By the time I came back to the Laundromat Peter had made a ton of new friends, including some hard working Forest Fire Fighters. He also managed to tear open the crotch of his rain pants! The pants were now useless so he did some cutting and sewing and magically turned them into a skirt that had quite the slit down the middle (pictures to come on next rainy day).

We packed up our bags with all our clean clothes and headed to the local outdoor store Hike-N-Peaks. Peter needed a new bandana which he used to clean himself off with at the end of most days. While we were in there we met another couple who were PCT hikers. They said they were about to go do laundry and asked where they could buy soap. The gentleman from earlier had given us enough for 3 loads and we were happy to unload our remaining supply and pay it forward. At the same time, one of the employees said "Well, it's 12 o'clock, who wants a beer?", to which we replied "We do!". I later read in the gut hook app comments that this store was very hiker friendly and often offered free beer to hikers. At this point we had already received three acts of kindness and my heart was bursting with gratitude.

The final task of the day before having lunch was to find a grocery store and do our re-supply shopping. The store was quite large but it was lacking in some of the staples that we were looking for (i.e wraps) but we're alive today so it couldn't have been that bad. We went outside with our new goodies and started to pack our food into our backpacks. As we finished packing, the sky opened up and it began to rain. Conveniently, a restaurant called Takoda's was within arms reach and it so happened to be recommended to us by one of the forest firefighters that Peter had made friends with at the Laundromat. From the outside, as well as the inside, Takoda's didn't look all that inspiring. Whenever I go into a town I want to try the local hot spots and this just didn't seem like one of them. I'm a bit embarrassed about the tiny tantrum I had but I was hungry and wanted something boujee! At this point, the rain had turned into thunder showers and I begrudgingly ran into Takoda's. Peter ordered a chicken burger and a beer and I ordered a BL'A'T with fries and a beer. Our server so generously gave us free access to the salad bar because we were PCT hikers. The servers were super friendly and were very interested in hearing about our hike, In the end, they comped our beers, gave us free salad bar, and even gave us a PCT discount. By the end of the visit, I was screaming "Takoda's for the win!". Just another reminder not to judge a book by its' cover.

By the time we had left the restaurant the sky had cleared and we set off down the street to find a good  hitch spot. Within 20 minutes a blue minivan had pulled over and we eagerly ran over to it hoping it was for us! As we approached we saw she was frantically clearing away items and making space for us in her car. She apologized for the mess and I reassured her it was the last thing on our minds and we were just grateful for the lift. The ride was eventful and I couldn't help but be a little concerned that the speed odometer was just spastically moving back and forth. Luckily, we made it in one piece and thanked her for her generosity. I think in total we had 5 acts of kindness in the short time we were in Sisters. A short visit to remember! 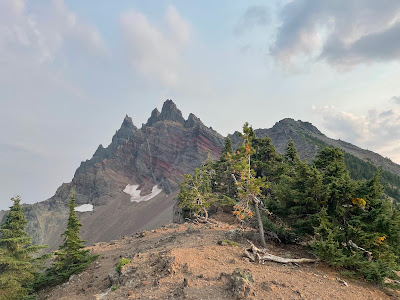 It was roughly 3 o'clock by the time we got back on trail. Our full bellies carried us until the darkness of night where we found a place to camp around 9pm. We quickly set up our tent and tried to clean off in the lake before getting all cozy into our sleeping bags.

The following day we would be picked up by Devilfish and would start the big adventure around the closure! Stay tuned...

Posted by Nicola Gildersleeve at 10:55 AM