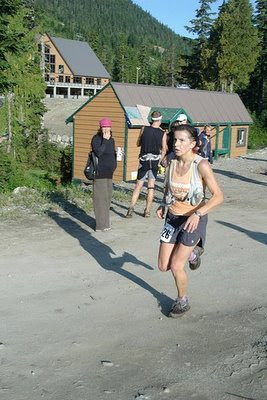 I have had the pleasure of knowing (but somehow never competing against) Ellie Greenwood for just over a year now. We seem to keep missing each other in a lot of big races. Or we do the same race, just in different years. I have always been impressed with her running and this year she just tore it up. She won Chuckanut 50km, Knee Knacker 50km, Stormy 50 miler...and more! I look forward to chasing her at Rubble Creek 26km on September 27th! She will definitely be hard to keep up with that's for sure.

When did you get into running and even further, into trail running?

I had always run for fitness and enjoyed running some cross country at school but wanted to have a goal so decided to sign up for a half marathon, the Great North Run in the UK, the biggest half marathon in the world with 50, 000 runners! I loved it and then when I moved to Vancouver my boss was training for his first marathon so I jumped on the band wagon with him and raced Victoria in 2002. I’ve not really stopped since then. I remember seeing people running on the North Shore trails when I hiked them in my first summer here and thought it looked like a lot of fun but didn’t know how to get into it. A friend then introduced me to Club Fat Ass and from there I had an immediate group of welcoming and encouraging trail runners.

You are originally from the U.K, when and why did you decide to move to B.C?

I came to Canada for a year out after university in summer 2001, I got a job I enjoyed working with UK skiers in Jasper, AB and that then led to promotion and relocation to Vancouver (with a few summers in Norway and Switzerland in between!). I just ended up keeping coming back and eventually never leaving.

You have had a sensational year so far, even with the injuries you had in the middle of the season. How did you manage to come back from that?

Simultaneously, a painful SI joint and a ruined hamstring have been the first injuries to literally stop me in my tracks. I have had injuries I could run through before but this knocked me for six and I had no choice other than to take a total rest and invest in serious physio and massage (to which I am now a total convert). I eased back in slowly and cut back race goals dramatically, setting long term goals and took each day as it came. I spent more time in the gym doing any cross training that didn’t hurt than I care to remember, I even tried pool running (awful!) and I learnt to be (a little) more patient!

You seem to have a lot of close running friends here in Vancouver; did you find it easy to meet other runners?

There are so many great groups to run with in Vancouver, be they social road runners, competitive track runners or the crazy ultra girls and guys! I got out there and was up for any run – new distances, new terrain, new people - and so it was easy to make lots of friends. Runners, as a general rule, are a pretty welcoming bunch.

When did you run your first Ultramarathon?

Club Fat Ass New Years 50km, January 1st 2004. My friend bailed on me due to the weather but I was determined to run anyway. My boss was clearly worried I would not show up for work 2 days later so he drove me to the start, leant me his wife’s cell phone and then offered to run the last 25km with me – but I was too fast for him and he sneakily ended up getting a taxi to the end!! It was then probably in 2005 that I started racing other local ultras like Dirty Duo and Diez Vista.

You won one of North America’s most challenging races- Knee Knacker 50km AND you had the 4th fastest time ever for a female! What was your strategy going into it and how did you train for it?

I know that hills and steep climbs are not my forte yet I knew these were a major part of Kneeknacker so I worked like crazy on running what I had previously power hiked and powerhiking what I had previously crawled. I threw in Grind and BCMC repeats to work on speed on the hiking sections. Also, I got to know the race route like the back of my hand – I tried to make every Wednesday and Saturday training run so I literally knew every root and rock on the trail, and talked through race strategies with many of the awesome locals who have run this race for years on end. I had hoped I could sneak in under 6 hours so to run 5:36 on race day was a stellar result for me.

What does a typical training week look like for you?

This year I have done far less road running than usual (due to injuries) so typically I will do one long trail run – say 4hrs or so on the weekend, I will then throw in at least one other 2hr or so trail session in the week. On these I don’t worry too much about distance, more about time on the feet. I usually make it to the gym twice a week – for weights and core exercises but also at least an hour of cardio each time. I will then do a tempo style road run of about 12 – 14km and intervals on easy Stanley Park trails. I truly believe that road running and intervals help my ultra trail running – it keeps the leg turn over up and teaches you how to kick when you need it.

What are your future running goals? Any plans on running a 100km or 100 mile distance?

100 miles is a distance that still kinda scares me and right now I’d prefer to work on being faster as shorter (say 50km and 50 miler) distances. I’m targeting my first 100km race next year (training in Banff in the winter permitting!)

Not only did you break the Stormy 50 mile course record, you PB’d by over 50 minutes. What was different from last year?

2008 Stormy was my first ever 50 miler so this year I got the start line at least knowing what I had let myself into. I also think that my Kneeknacker training had vastly improved my running on the hills. But most important of all was that my stomach held so I could carry on fuelling properly right to the end of the race. In 2008 I pretty much stopped eating 5 hours into the race as my stomach was so churned up, and needless to say my pace dropped off dramatically. This year I was also fortunate to play cat and mouse with Adam Lint for most of the race so we really pulled each other long and the company was a great boost.

I know you are moving to Banff for work, can you tell us what you do? Also, Is Banff a permanent location for you?

I work for a UK tour operator that specialises in ski vacation packages. This summer I have been doing airport meet and greet but this winter I am back to being behind a desk, general admin, operational planning, contracting with hotels and ski resorts etc. The job move is permanent so so long as I can survive running in Banff year round then in theory the move in permanent. I will miss Vancouver and the BC running scene tones and I’ve never lived in one place for more than 2 continuous years, so who knows if/ when you’ll see me back!

Do you have a training buddy?

I have tones of training buddies! Friends at Pacific Road Runners keep me honest on my tempos, VFAC friends kill me on weekly intervals and my friend Mike is always up for a long run on the trails; he puts up with my ranting, raving and moans which is incredible and pushes me to the limit. There is nothing like a bit of friendly competition and it’s great to have a buddy to target the same races with. I also love to go on a girls trail run with my awesome friend Jackie as often as I can. The list could go on and on....

What was your favorite run of 2009 (doesn’t need to be a sanctioned race)?

Oooh, very hard question – all races/ runs have their merits. Running the Juan de Fuca 47km trail on Vancouver Island with a group of friends this summer was a lot of fun – awesome ocean scenery, magical forests and fun camping times.

Name one thing most people don’t know about you?

I have a degree in history – specializing in early medieval European social and religious history! Somehow I managed to end up working in Canada in tourism.

Can you provide any advice for someone attempting their first ultramarathon?

A 50km is only 8kms longer than a marathon, most people don’t run the full 42kms before marathon race day so don’t obsess with 50kms being some insurmountable distance. Link up with fellow ultrarunners, focus on getting training time in even if it’s slow. Oh, and practice what you will eat on race day – you can’t skimp on nutrition on an ultra (well, not if you want to enjoy it!)
Posted by Nicola Gildersleeve at 3:34 PM