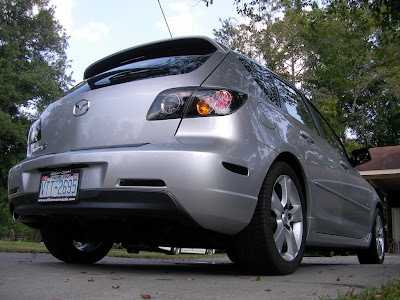 There she be...I called her Sergeant...G.I Jane baby! The last 3 letters of the license plate are SGT, it was only fitting.

I agonized over what I should do for a vehicle for quite a while after it got totalled. You can breifly read about that HERE if you want the background story.

After countlessly contemplated not getting a car, I realized that I am way too lazy to walk the 20 minutes to the grocery store, suck it up and bike to work and/or hitchhike my way up the mountain (especially in these winter months). With all that said, I decided to buy one.

Then it came down to buying another old one or go for a newer one? Well, I applied for a line of credit and got it. However, having never really had debt in my life I was a little concerned about having one. But, knowing I have to drive the Sea to Sky highway every so often left me feeling as though I needed something reliable. Plus, I wanted a car I could take road tripping and more importantly, something that would hopefully last me a long time.

In the end, I found a great deal on craigslist for this bad girl and I jumped on it. Having a car salesman as a client helped as well. I got a killer of a deal for a used 2005 car with only 65,000km on it. It took me a few days to get over the fact that I had such a nice vehicle. I couldnt help but feel like I was selling out. I live pretty frivolously but here I am spending all this money on a car. However, I know this thing will bring me much freedom and memories. I'm pretty sure that if I fold the seats down I could manage to sleep in it!

The days have been a little rainy and muggy but I am still managing to get out the door and get my runs in. These aren't even training runs as I am not training for anything- besides life. hey are fun runs where I go where I want, for however long I want.

As for next year, I have decided I am not going to race anywhere I can't get to by car. Over the past few years I have spent all of my money on trips, mostly running trips. I have had a ton of fun in the process but I'd like to take this year to enjoy everything around me because it's just so damn beautiful. I had contemplated heading over to one of the montrail ultra cup races to try and get a spot for western again (bandura, ice age) but when its all said and done, its just way too much money, especially for ONE race. There are so many other hidden gems out there that are local and easier on the pocket.

I am pretty stoked for the next few weeks. Lots of time will be spent with family and friends. I'm heading up to Mt. Baker this weekend and then over to Whistler for 4 days with Peters family. Hopefully my legs can handle all this skiing! Then it's back to North Van for Christmas Eve/Christmas day dinners with the Gilders! Can't wait.

See you in the trails!
Posted by Nicola Gildersleeve at 1:46 PM 1 comment:

Learning to Drive all over again!

Wow, I just had a 90 minute standard car driving lesson. My one regret (not really) in life will have to be not having learned this years ago when I started to drive. It feels so unnatural to have to use my left foot. Usually it just dangles pretty off to the side. I only managed to freak out and cry once.

I started to find all my mistakes/frustrations rather amusing by the end. I think being the instructor for these lessons would be such a tough job. A) you have people totally freak out on you (2) because I was concentrating so much on changing gears etc. I was definitely veering in all sorts of directions, not to mention, almost rolling back into cars on slopes (3) you have to repeat yourself A LOT and (4) and give positive encouragement even when the person is totally blowing it!

Man, that was crazy. I tend to get frustrated when I can't pick something up quickly, especially when I repeatedly make the same mistake over and over. He had to politely tell me that "it's ok, your a beginner, it's going to be tough", "No one ever picks it up right away". However, he did tell me that compared to most, I was "the best". Maybe he was lying to make me feel better but maybe not...I'LL TAKE THAT!

Tomorrow I get possession of a standard car and I guess I'll be learning as I go. The lesson was a good start. It's a good thing Squamish is a bit flatter than North Vancouver. Anyone have any good "Learning to drive standard stories???"

See you in the trails!
Posted by Nicola Gildersleeve at 3:08 PM 4 comments:

I think I have forgotten how to blog it's been so long! I guess 3 weeks isn't that long but when your used to blogging a few times a week, it feel like forever.

Our move up to Squamish has been both amazing (hands down best decision I ever made) but has had it's share of frustrating moments.

We love our place and location. So far, the running I have done (before it snowed) was great and made for some awesome solo exploration. Jen, my local running tour guide, has taken me on a few runs up and around Alice Lake. And of course, the mighty Cheif has called my name more than a couple of times. I actually hiked it with my aunt and uncle yesterday. My uncle had NEVER hiked it, and my aunt hadnt done it since she was 8 years old. The snow was still hanging around but the tourists weren't and we had the Cheif all to ourselves. 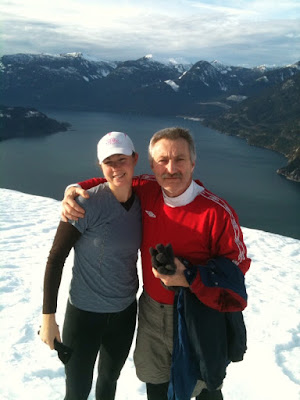 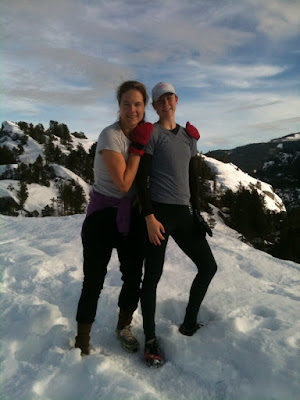 I know I should probably explore some new places (up high) but I am a little nervous all by my lonesome in the snow.

The only frustrating thing about our move was the lack of cleanliness on our landlords part. I hesitate to say anything bad about him because he is such a nice and genuine guy, however, our place was filthy when we came to move in. He also has a dog who left behind a colonie of fleas. I can't beleive how incredibly grossed out I get when I spot them. It must have to do with the way they jump around. The straw that broke the camels back was when we woke up at 3:30 in the morning with them in our bed. After trying a few lower key flea/bug sprays, it's looking as though we may have to fumigate. I'm getting the feeling that because I havent blogged in so long, I'm starting to overshare...yes? haha

The week of our move, Peter got in an unfortunate accident in my car (he's not at fault), which ended up being a write off. Peter managed to get away with some scrapes and bruises and the odd ache and pain in his shoulder but overall he is doing well. However, this has left me without a vehicle, which is almost a blessing in disguise because I was considering giving my best go at becoming a bike commutor. This would not only save me a lot of money, I would be able to afford a mountain bike. Even though the money I got from the write off (1990 civic) is not quite enough to buy a mountain bike, it will help towards one. I also wonder how much freedom I would be compromising by not having a car...any thoughts?

I can't beleive all the wonderful things that are available to me within a 10-20 minute drive. I went snowshoeing up in Garibaldi Park with 2 friends of mine. We were only able to make it to the first hut because they had to be back in North Van but that left me wanting to explore more. I must admit, ski touring looked like a lot more fun, especially on the way down. I am just waiting on my bindings and once those arrive, I can assemble my skis and hit the hill. I am so incredibly stoked. Last year was the first time I had skiied in 13 years but it was amazing how fast the skill came back. It also made me realize how much I missed it.

The last thing on my list this month is to pick some running goals for 2011. I find I am struggling with this right now because I really want to enjoy everything I moved to Squamish to discover. I want to climb, mountain bike, ski tour, and pretty much just take advantage of everything that is in my backyard. I fear that trying to focus too much on one thing will take away from all the others. Perhaps, this is a good year to teach myself how to still run/race while finding balance with those other activities.

Peter said it best, why vacation this year when we have everything we need right here in Squmaish. We literally could spend the entire summer climbing here and still never hit anywhere near all the routes that are available to us.

I know I sound like I am turning into a climber but running is still my go to form of euphoria. In fact, there is a rainfall warning going on right now for this area and its pissing rain here today. Nothing makes me want to get outside more than running on a rainy day. It makes you feel so alive and pretty awesome when you see everyone bundled up with the heat on driving down the streets, and here you are, braving the elements!

Alright, time for a run and then a day studying for my final exam!

See you in the trails!
Posted by Nicola Gildersleeve at 8:52 AM 2 comments: