It's funny how going for a run can make you feel like you can change the world...
Posted by Nicola Gildersleeve at 4:35 PM 1 comment:

This morning in between clients, I decided to make a quick pit stop at Delany's for a nice cup of Joe (I don't even know why it's called that). I was looking through the Province newspaper and came across this article (Title above) by Peter O'Neil. I was shocked but not surprised by the numbers and the fact that they are not only amazingly high, they are also increasing.

- Canadians are among the fattest people in the Western world. 60% of Canadians adults are overweight (which is up 2% from 2008) and 1 in 4 (24%) are obese!
- The problem is worse for men at 66% and females at 54%.
- In contrast, the thinnest are the Japanese 24% overweight and 3% obese.
- They say, the goodnews, we are getting fatter every year, with the proportion of overweight people expected to rise 5% over the next decade.
- In America, they estimate that 3/4 of the population will be overweight by 2020.
- The report states that 25,000 to 40,000 pre-mature deaths could be avoided annually with stronger "interventions" such as education in schools, mass-media campaigns, better food labelling, industry self-regulation and improved physician counselling.

Here is a table that summarizes each province and how they stack up to one another:

I know there are a lot of overweight and obese people in this country. However, Vancouver, where I live, has the lowest percentage at 12% obese.

Health Canada can say all they want about what is going to stop this epidemic but in the end, the choice comes down to the person. Just like finishing a 100 miler, you have to want it pretty bad!!!! The power comes from within and believing you can do it.

Food companies can change a label to say 'THIS IS NOT GOOD FOR YOU BACK AWAY NOW'- and it wouldnt stop people from buying it. Just like ciggarrettes, unless the person wants to change, a label on a package, no matter how disgusting it is, won't change the behavior unless they want to change it.

Anywho, just some food for thought...

See you in the trails!
Posted by Nicola Gildersleeve at 2:56 PM 3 comments:

I was kind of dreading having to write this blog because anyone who really knows me knows how incredibly indecisive I am. This post might have you thinking..'can't she ever make up her mind', but to me, this is one decision I feel I am incredibly decisive about.

After 2 weeks of school (yes, not long, but it felt like ages) I have made a switch in direction. In August I signed up for classes (pre-requisits) to Persue a career in P.E teaching. This was not a new idea, I had been thinking about it for quite sometime. I was also taking one counselling psychology class as a pre-requisite for an eventual masters in counselling psych to become a guidance counsellor. Everytime I sat in a teaching class, I couldnt help but think to myself "what am I doing here?" and I was constantly questioning if this was even a career I wanted. Part of me thought it was just a practical position because you get great benefits and a pension. However, I am not a practical person. I live my life very unpractically, which has proven to be a blessing. It has allowed me to LIVE MY LIFE.

However, with all the dislike of my other classes, I was LOVING my counselling psych class. I activily participate in the class and I actually WANT to read the text book. I kept thinking to myself "why not skip this teacher bit and just persue a career in counselling". With the deadline of dropping my classes and still getting a refund looming over my head, I finally made my decision. To be honest, it feels like a weight has been lifted. There is nothing worse than being in a classroom when you flat out don't want to be there. I really tried to put my best foot forward, telling myself that doing classes you dont like is just part of the game. But, I did that for the 6 years I was getting my degree and life is just too damn short to want to do it again!

Now, I am back to my life. I only have to go to school 1 day a week. I added another counselling psych class I need but it is online! I am so excited to learn more in this area. A masters in councelling psych is the nest step but I am not going to jump into that until I am really ready to be there.

I am doing a 15km race out at Bunten Lake this weekend. I am excited to go run fast on some amazing trails with a bunch of other people. Time to get my speed cap on!

Congrats to everyone who did Frosty 50km last weekend!

I finally came out of retirement and spontaneously decided to do my first event since Western States. Taking the last 2.5 months of racing has been really good for me. Previous to last weekend, I hadnt even felt an urge to race in the last couple of months. Then all of a sudden that urge came back, so I jumped in it.

The Coho Run happens every year and is part of the bigger Coho Festival. Besides sending an important environment message, the purpose of the festival and the Society’s other endeavours is to raise funds for salmonid culture programs in North Shore schools and to support volunteer-managed fish hatcheries and local environmental groups involved in stream protection.

The run starts in Kitsilano and scenically takes you over the Burrard Street Bridge, onto the Stanley Park Seawall, over Lions Gate Bridge, and Finishes at Ambelside Beach (i.e- beach-bridge-beach-bridge-beach).

I was full of energy on this warm but rainy day. I was also full of inspiration because of those I watched participating in the giant Grand Fondo the day before. For those who don't know, the Grand Fondo is a 120km road race that went from Vancouver to Whistler. My boyfriend Peter pretty much did it off the couch and quite successfully I may add, finishing in a time of 4:45. All he was left with was a very sore butt the next day!

3, 2, 1...and we were off! I basically tried to mimic my 10km pace hoping that I could just hold on for the last 4km. Now, It has been a long time since I raced a 10km, so I don't even really know what 10km pace is. I just went out at a pace I thought I could sustain for the entire 14km. I mean, pace varies and is switched up multiple times in a race like this. I slow down a bit on the uphills, speed up a bit more on the downhills, and try and go as fast as I can (within reason) on the flats. I felt really good and was catching people all day.

There were definetly moments where I would think to myself "right, now I remember why I run ultra's". In ultra's it is usually a body part that starts to get tired, but in this race it was my lungs! I was more than happy to reach the 13km mark and cruised on in for 3rd place female (I think) in a time of 56:30! My goal today was just to go out and have some fun running fast, which I felt like I did. The day before I was unsure whether or not I could break an hour. I was stoked to see I did. These short races always hurt during but I truely do feel so good afterwards.

My family was having a big breakfast for my cousin Jordan who is moving to Toronto for work. The food and company were amazing. Great way to spend a day after a race. I would like to congradulate my uncle Mike for getting engaged a couple of weeks ago to his stunningly wonderful fiance Hilda. She has been such an amazing addition to our family and I couldnt imagine himself finding anyone more perfect for him. Love you both.

Alright, off to class. Analysis of dance here I come! Oh the glories of becoming a P.E Teacher.
Posted by Nicola Gildersleeve at 9:40 AM No comments: 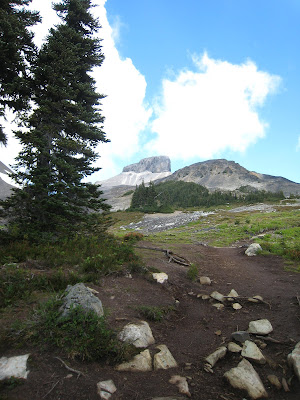 (The Grey peak on the left is Black Tusk)

As Monday rolled around, we naturally found ourselves in need of a rest day from 2 days of climbing in Squamish. Neither of us had ever been up to the Black Tusk so the decision was easy. We got up, ate some breaky/packed lunches and drove out to Squamish for the 3rd day in a row. I love doing long hikes on Mondays because there is hardly anyone else out there on the trail. Tamsin did the same route we did the weekend before, but didn't end up summiting the Black Tusk itself because there was a 30 minute waiting line! 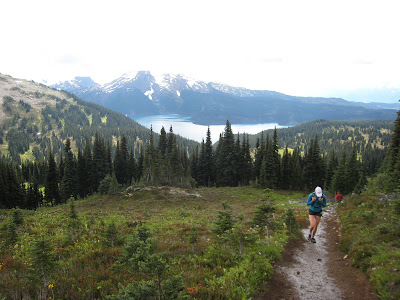 The hike starts with a pretty boring 9km uphill switchback slog through the trees from the Rubble Creek parking lot. Once you are out of the trees however, the scenery is stunning. You have Garibaldi Lake on your right (as well as other amazing landmarks) and Black Tusk on your Left. It's odd though, it is not until you are almost right at the tusk does it look black. I kept wondering why it was called "Black" tusk because from afar it looks Grey. 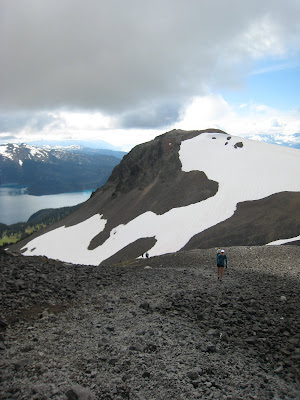 The trail after the Black Tusk junction is quite steep and after a couple thousand feet of climbing the ground gets quite rocky (loose rock- gaiters would have been nice!). Nonetheless we got to the Tusk. It was in the clouds and the weather turned cold. We put on a few extra layers and were good to go. You can climb up the Tusk itself and the first way we chose proved to be a little bit sketchy. Besides the fact that it was very steep, the rocks that form the tusk are quite loose. I didn't trust that whatever rock I used to pull myself up on would not come flying out of the rock, rendering me to my death. The thought of down climbing freaked me out even more. I knew there had to be another way because lot's of people go up the tusk. We wandered around the corner and there was in fact a much safer way. I was happy to have made it to the top because I am not one to usually forgo the epic end to an adventure. 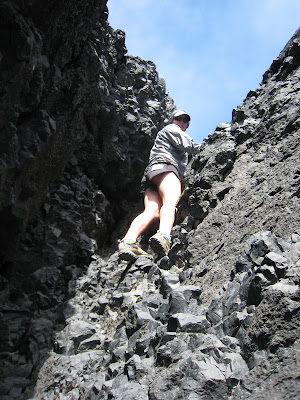 (Climbing up to the Summit)

We didn't spend much time on the summit because it was really cold. We spent just enough time to grab a few shots. After descending we made our way back down. Eager to get back to the car, we ran pretty much all the way back to the parking lot. The hike up/run down was just over 5 hours in total. 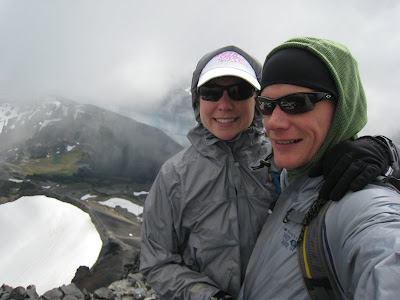 (All photos taken by Peter)

We followed this up with our standard trip to the Howe Sound Brewery for a pint. They always have great beer specials on Mondays!

Alright, I head off to school next week. I am a little nervous but I am sure it will be awesome. I have thought about a few races I would like to do in the upcoming months (1) Buntzen Lake 5 peaks (2) Giv'r take around the lake 30km (3) Hallow's Eve...In the words of Jerry McGuire...WHO'S COMIN' WITH ME?

See you in the trails (or the streets of Kitsilano and Dtown running to and from School!)
Posted by Nicola Gildersleeve at 7:31 AM 2 comments: