Last year I raced very little, I think twice. This year I vowed to step it up a little bit so I signed up for 3 races...ha! I write my board exams for Massage Therapy in September so I am packing all of my racing in before July as to have ample time to focus on passing my board exams. I'll most likely do more racing after that but nothings on the schedule.

Last year I won the Kal Park 25k and was excited/nervous to test myself out on this course again. However, due to a trail closure, we would be running an old version of this race. I was totally stoked on this because new to me trails are always a blast. Peter and I joked about this being a "C" race, as in, let's "C" what I can do.

I woke up Saturday morning feeling a bit unmotivated or maybe subconsciously I was nervous for the run. The thought of racing is sometimes daunting when you haven't done it in a while. Last year I biked to and from the event and I took great pride in having done my first race completely self-propelled. The thought of doing that again gave me my mojo back so I decided to run to the event, which is roughly 9k from home. I'm also running a 47k race on June 3rd and really needed to get in a higher mileage day.

It was a beautiful sunny (with clouds) kinda day and my warm-up run felt pretty good. I got to the race with roughly 25 minutes to spare. Enough time to pick up my package, catch up with friends and hit up the little girls room in the bushes. Before I knew it, we were off!

The first 8k or so is mostly climbing. I'm never the first one up the hill. This year, I got to the top of the hill in roughly 6th place. As we began a small descent I passed the next female (Narumi) at the exact same place I passed her last year. We exchanged some nice words and I continued my chase. I passed 2 more females going down Parabola, which is one of my favorite steeper downhill sections. The trail meanders flat and downhill a bit longer before skipping across the Cousen's bay parking lot and over to the other side of Kalamalka Park.

I was getting into a nice groove and feeling good and was nearing the first aid station at 12.5k (half way). Sometimes the problem with having a trail race in your own back yard is you are used to the way the trail typically goes to a certain place. There is a set of switchbacks that go up to the aid station but as I began on the last switchback I realized there was white chalk blocking the way. It was then I realized I was off course. I re-traced my steps and realized they cut the switchbacks off early and diverted the runners on a narrow steep trail that just went straight up to the aid station. I had never taken that off shoot before. It didn't cost me too much time but when I got to the aid station, 2 women that I had previously passed were now ahead of me and weren't stopping to fill up water like I was.

This error messed with my head a bit. I couldn't believe I didn't see the turn off. At any rate I kept going to the best of my ability. I was heading into an area of Kal park I had never been and the trails were really fun. It was wet and muddy! Good coastal conditions. There was one guy ahead of me and he was tip toeing around all the flooded trails but I enjoyed barreling through them. I didn't see another female for quite a while which made sense because we were on a long uphill section. I was hoping I wasn't losing too much ground because there was a nice juicy descent coming up. Just before the descent began I could see another female up ahead. I caught her not long after the descent began and wondered if I would ever see the other women who were ahead. This downhill is so fun and goes on for a while. Towards the bottom I spotted 2 women and a man. They seemed to be running together. I caught up to them and ascended with them to the aid station. This is the same aid station as before- you hit it twice in this race. At this point there was 5km to go. I stopped to fill up my water bottle and no one else stopped. 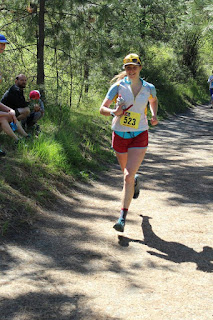 At this point I was in flight or fight mode and I wanted to catch and pass these ladies. I caught them both on the short descent from aid station and knew it was time to put the legs into high gear. I had a 1 km flat section, 1 km meandering uphill and 2km flat and downhill to the finish. If I could just hold them off to the top of the hill I knew I had them beat. I cruised the flat section, although I got stopped in my tracks by 3 people horseback riding. They politely moved out of the way and I continued on, As I made my way up the final switchbacks I could see one of the girls was on the switchback below. This only gave me more fuel for the fire. The next 2km I ran as hard as I could and was able to hold them off all the way to the finish. I finished in a time of 2:28 and 2nd female. 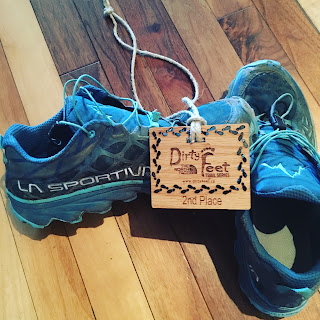 It felt really good to race again. I enjoyed running my own race at the beginning and then switching gears and having to work hard at the end. The competitive mental game is always a fun experience and something I just don't get very often in training (I train solo a lot of the time)

Thank you Dirty Feet Trail Series for putting on a great event. I'm looking forward to checking out some of your other events soon too!

My La Sportiva Helios were the perfect shoe for the day (and for everything).

My next race is The Wildhorse 45km on June 3rd. It's a point to point event from Kelowna to Naramata.

Posted by Nicola Gildersleeve at 8:24 PM No comments: