When I moved to Vernon I was really excited to check out some of the races that are local to the Okanagan. We are really lucky here because there are a couple of trail racing companies that put on races. I have long heard of the P.A.C.E trail running series and had yet to check it out! Wildhorse 50k would be my first shot.

I haven't laced up my ultra shoes since September 2016 when I did the Golden Ultra and I've really been looking forward to getting back at it. A lot of the 50k's in our area are double 25k loop courses and that is why the Wildhorse 50k really caught my eye. A point to point trail run from Kelwona to Naramata. Yeehaw!

Note: If you are planning to have a car at the finish there is a shuttle that meets you at the finish (very early 5am-ish) and takes you to the start race morning. That means a 3am wake up to get to Penticton in time to catch the shuttle. Luckily, Peter drove me to the start line and picked me up at the finish. Another good thought is to camp right at the finish in Naramata and save yourself the morning drive.

The race starts at Bertram Creek Park in Kelowna right down at the beach. There's a short climb up from the beach to the road and then a few nice easy k's along the road to the trail. The road parallels Okanagan Lake and the views are very beautiful. I found myself in the lead pack of women. There were 5 of us. My friend Tory Sholtz had mentioned that her friend Becky Bates was running the race too and so I asked the group if there was a Becky among us...and there was! Becky is a 55 year old Bad ass living in Kimberly, BC. She said she used to climb quite competitively but has only been running about 3 years. She is training for the Hardrock 100 which she got into...through the lottery! It was her first time applying and she had a 0.8 chance of being selected, How cool!

The 5 of us started up the trail together and my training buddy Tom Craik was right behind us. Tom and I shot the shit for a bit as we made our way up the steep climb. Eventually the trail began to flatten out and I passed 3 of the women and was now running in second. Oh and Becky, she gapped us super fast going up the first climb and was out of sight pretty quick. After the climb you drop down a bit and end up on a flatter section of trail which consisted of mud puddle after mud puddle. These puddles were long and deep and made for some interesting travel. I didn't mind though! The gnarlier the better. After many km you climb back up a bit and drop back down 200m to the first aid station which was at 21km. This aid station was a re-route from where it was originally supposed to be at 7km.

Aid # 1 was pretty cool. The volunteers boated and jet skied supplies into the aid station and due to flooding we were warned of a chest deep swim to get to the aid. However, there was a really long downed log that allowed us to avoid getting wet. I was very appreciative of that! I filled up my pack with water and grabbed some gels and got out of there. The aid station is an out and back so I got to see how far ahead Becky was. I wouldn't say she was more than a minute or 2 ahead before I got to the aid station. Adria Snowden, who was in 3rd, left the aid station just behind me. We climbed back up out of the aid station together and chit chatted/ran for a while. The next 13km were the toughest of the day. We were really lucky weather wise. It could have been smouldering but there was some nice cloud cover which kept the temperatures at a reasonable level for the Okanagan. Adria and I leap frogged a few times going up the climb with me taking the lead on the descents. She pulled ahead just before aid #2.

I was almost out of water by the time I got to aid # 2. It was also around this time that I started to get the gurgles in my throat. I don't know how to describe it but it sucks and I suffer from this in most of my long races. I think if I knew how to burp I could calm it but I've never had that skill. I may be the only person I know that doesn't know how to burp. Any tips?

From Aid #2 to the finish is 16k of "easy" running. It reminds me of the last 10km of the chuckanut course. It's easy miles but mentally it's challenging. For those of you not familiar with Chuckanut, it's a flat wide gravel path to the finish. Once we got onto he KVR I believe it's a 2% grade downhill. Adria, another gentleman, and I left Aid # 2 together and pretty quickly I put a gap on them. Really quickly I stopped to pee and noticed the guy (didn't get his name) go by. He laughed to himself as he passed and later told me he laughed because Adria had also pulled over to pee at the same time. Quickly after my pit stop I passed the guy and was running solo. My energy levels felt good and I was ready to rock this last section. My energy surge faded very fast and the gels I was taking weren't perking me up for very long. My throat gurgling wasn't helping my want to ingest calories but I was forcing them down every 20-30 min in the hopes of getting some energy.

I can't remember exactly when it happened but Adria passed me. I would say it was with roughly 6-7km to go. However for those 6-7k she was never out of sight. Just after the last said station at 46k my quads started twinging. Shoot! I slammed some salt pills and hoped for the best. They continued to twinge any time I tried to run faster so I compromised to just keep trucking. We finally got off the KVR and began our descent (on the road) to the beach/finish. We winded our way down towards the beach and I swear the twists and turns kept coming and this race was never going to end. My watch said 50k and the volunteer said 1km to go! Up ahead, I could see Adria was cramping to and was reduced to a limp but then she'd start to run again. My heart wanted to run faster but my muscles were't so into that. There was a tiny minuscule hill just before the last descent to the finish and as I went to run it, both my medial quad muscles cramped and I had to walk it. 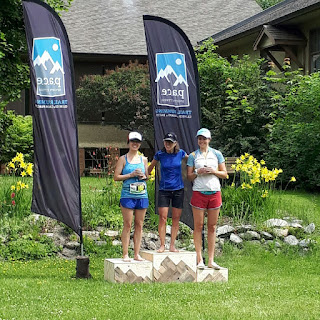 I crossed the line in 5:32, 40 seconds behind Adria (10 minutes behind Becky) good enough for 3rd place female and 9th overall. I was greeted with a giant hug from RD Rene Unser and was gifted (as all racers were) a nice bottle of Tinhorn Creek wine.

That race had it all. Amazing views, challenging course, and required a good amount of mental toughness. Initially the course was 45km but due to the flooding it was re-routed and became 50 (maybe 51km). I highly recommend it to everyone! The complimentary lunch at the finish was gourmet and amazing and Tinhorn Creek and Elephant Island wine were there sampling wine.

You can camp or stay in cabins right at the finish line and there's a lake for swimming to.Thanks to all the amazing volunteers that helped make this event so awesome. Thanks again to La Sportiva for all your support. I love knowing that I don't have to worry about my feet.

La Sportiva Helios SR - I love these shoes. They were perfect for the conditions and I finished with no blisters and no falls!

La Sportiva Speed T-Shirt - I love the front zipper for that extra ventilation!

La Sportiva Trucker Hat - It was awesome to dip in streams to cool off!


Posted by Nicola Gildersleeve at 3:59 PM No comments: