I signed-up for the Rainshadow Running Oregon Coast 50km event with a bit of hesitation. For some reason the 6 miles of beach running at the start had me a bit nervous. But, I convinced myself that everyone would be in the same boat and that it would probably be pretty hilarious.

I had registered months ago and finally race weekend was upon me. I can't say I was 100% confident how race day would play out. It had been weeks since I had done a long run and the monsoon rainy weather we've been experiencing had left me feeling less than inspired to get outside and train mid-week. However, I this lack of motivation meant that I was very well rested and "tapered". I can make a positive out of any situation!

On Friday morning I jumped in a car with 6 of my friends/co-workers. I knew the ride down was going to be a blast and that the weekend was going to filled with a ton of laughs. We drove pretty much traffic free all the way to Portland where we made a pit stop at Deschuts Brewery. Beer has this way of making my stomach hurt/bloat so I didn't have any beer and would save that until after the race. Afterwards we loaded up at wholefoods and set off on the road again, We arrived at our hotel (The Adobe) in Yachats Oregon around 8:00pm. The race package pick-up/finish was at the Adobe hotel, making it the perfect place to stay. Thanks Hannah for being organized enough to book that in advance!

I woke up, made some instant oatmeal and made my way outside for package pick-up. The wear outside was pretty drizzly and windy but it was warm so I wasn't too concerned. The biggest question mark of the day was what shoes to wear. Everyone I knew were starting out in one pair of shoes and switching it up after the beach section 7 miles later. Our shoes were guaranteed to (a) get wet and (b) be full of sand. I made the conscious decision to start in my La Sportiva Vertical K's and would switch out to my Crosslites at mile 7. I also decided to start with a handheld bottle and switch over to my pack at the first aid station. All 50km racers then boarded a bus and were driven to the start line.

We had a few minutes to kill in the parking lot before we were taken to the start line on the beach. At this point the weather was less than desirable and I was kicking myself for not bringing a jacket as I stood shivering in shorts and a t-shirt. Everyone made their way to the beach which lucky for us was pretty hard packed due to the rain. There was a crazy headwind and the whole scenario was hilarious to me: hundreds of runners let loose on a cold, rainy and windy beach.


After a quick countdown from James Varner, the RD, we were off! It didn't take long for people to huddle up in packs. Our pack had roughly 8-10 people in it and I knew quite a few of them. Now and again we would chit-chat but for the most part it was heads down running. The headwind was so strong that I could hardly look up ahead. Luckily, the air was warm and I wasn't cold in my minimal attire. I strategically began to draft behind people. However, I was at the front of the pack and wasn't always able to tuck in behind. At one point I thought about verbally communicating a drafting strategy to the group but I didn't know how that would go over. I also didn't know how the people I was drafting off were enjoying having me right behind them. But every time I wasn't behind someone I knew I was wasting SO much energy and knew it was going to affect me later. The miles were ticking off quite quickly and although my feet were wet, they were not filling with sand. The La Sportiva Vertical K's have an amazing built in gator and they did a great job keeping sand out of my shoes.

I asked a few of the other girls if they were going to change shoes and they didn't think they would considering the conditions. I was a bit nervous about not changing my shoes because I had never run more than 13 miles in them. I had never had a blister wearing them but 30 miles is a lot longer than 13! Not wanting to lose time to the other women, I decided to take a risk and try them out for the long haul. I stopped at the first aid station, which was located at the Adobe Hotel, only to grab my pack, which contained a full 1.5L water bladder and all the gels I would need for the rest of the race. I was in a pack of 6 girls, most of whom I knew. We had about 1.5-2 miles along the road to get to the trail and we chit chatted a bit on the way there. By this point, the weather was pretty nice and it was warming up. I was leading our little pack as soon as we got into the trail. Once it began uphill, I was passed by a female in a 7 hills running singlet, Jordan Maki-Richards. She looked fit and fast and I had no qualms about letting her go by. My friend Alexa was also moving well uphill and I let her go ahead of me. However, when the hill steepened a bit, she began to power hike and I kept running and passed her back. My legs were feeling really good and I decided to run as much of the ups as I could. I have learned over the years that I am way more efficient running uphill then walking if the grade is right. As soon as the trail began downhill, I opened up and passed Jordan and eventually caught up and passed one more female.


The trails were so fun and suited me perfectly. They weren't too steep and for the most part were pretty run-able. The descents were also just technical and muddy enough that I knew I would have an advantage because that is my bread and butter. I was in my happy place and there truly was no where else I would have rather been. The views of the ocean were breathtaking and I tried to soak them up as much as I could.

After mile 9 or so I didn't see many runners. I had been going back and forth with one guy, as he was a better hill climber but only passed a couple of guys in the middle. At the 24km aid station we pretty much re-traced our steps back to the very first aid station to the Adobe hotel. At this point we begin to share the trail with the 30km runners, which was great. I enjoyed cheering them on and stayed on the look out for my friend Hannah who was running. The trail was pretty narrow in spots and it was hard having both distances sharing the trail but we made it work! I forgot how much descent their was in those last 6 miles that we had done previously. The trail just kept going up! The trail was also VERY muddy at this point and I was lucky to have shoes with such amazing grips on them as people were slipping and sliding all over. 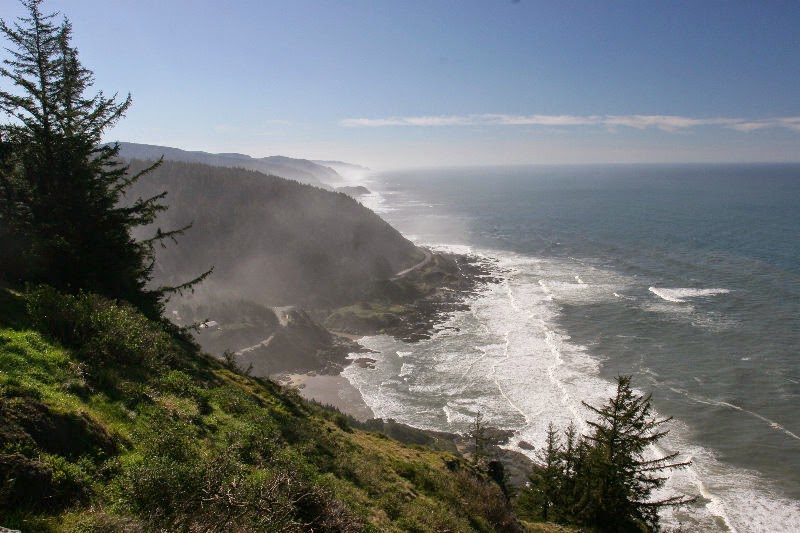 A 30km racer told me in those last few miles that I was the second women. I was pretty surprised as I thought there were more up ahead but was very happy to be in second. I passed a few more guys on the road back to the finish. I was pretty done by this point and running on the pavement wasn't helping. I just tried to keep a good steady pace and finish as strong as I could. The volunteer marshaling with 1 mile to go told me I was in 9th place overall which also gave me motivation to finish strong and not get passed.

I was ecstatic to see the finish. As always James Varner was standing there offering out high fives to all the finishers. As usual, I declined and reached in for a giant hug! I thanked him for making such a beautiful and fun course and chit chatted about how it all came to be. I was awarded a special prize for coming in the top 3 which was a custom Rainshadow Running beer growler. I spent the rest of the night eating amazing wood fired pizza, drinking beer, and catching up with other racers/friends. His races really are all about running in beautiful places and socializing (2 of my favorite things). All of this occurred with the most amazing ocean view just feet away. If you haven't done a RR running event, do yourself a favor and sign-up for one in 2015. Warning: they sell out really fast!!!!

On Sunday, the six of us checked out and had breakfast at the Green Salmon, an amazing breakfast/lunch spot in downtown Yachats. Then we drove home along the Oregon Coast, making a couple Rogue Brewery stops along the way.

Thanks again to James, Matt, Kerry and all the volunteers who made this event possible. I always meet such amazing people at these events (vollies and racers).

Thanks to La Sportiva for making amazing shoes that kick ass in thick mud and on wet rock and keep debris from getting inside!

Next up is another Rainshadow Running event in December: Deception Pass 50km

Love these posts Gilder! A great read and sounds like a super fun race. Thanks for taking the time to share your race with us. Hope to clink a beer with you guys soon. Give Watson a high five for me.