Not my usual Posting but a delicious one instead! 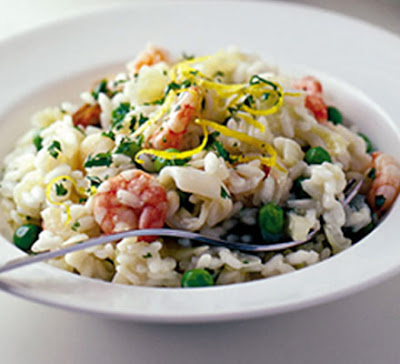 (This was taken off Google images...although it does look similar)

Not really a big deal but a reason to celebrate none the less. It was Peter and I's anniversary yesterday and usually we go run the Howe Sound Crest trail. We had already done it once this year and since were doing Frosty 50km on Saturday, we opted for a night in instead. I really wanted to make us something nice for dinner. My step dad was over from Powell River this weekend and he let me borrow his new cooking magazine. It was filled with amazing recipes and the best part, they were all designed for 2 people. That was fantastic because I am only ever cooking for Peter and I. Although, we do eat a lot and I am sure there is many a day where we could eat a meal designed for 3-4!

Tonight's menu:
Starter: Tomato and Bococcini Salad w/ fresh Basil topped with a balsamic vinaigrette.
Main: Seafood Risotto
Desert: I would love to say the strawberries and dark chocolate we bought, but it ended up being an evening out for desert- Gourmet Vanilla Ice Cream and Hot Fudge Brownie w/ Caramel!
Drink: Can't forget to mention the wine- Los Finca's Malbec

The Risotto was absolutly to die for and I honestly can't wait to make it again!
I loved it so much I will share with you how to do it.

1. combine the chicken broth and clam juice in a large microwave-safe measuring cup, cover, and microwave on high until hot, 1-3 min; set aside
2. Melt 1 TBSP of the butter in a 10-inch skillet over medium heat. Add the onion and 1/4 tsp salt and cook, stirring occasionally, until softened, 3-5 min. Stir in the rice and saffron and cook, stirring often, until the ends of the rice kernels are transparent, about 2 min. Stir in the wine and cook until it has been completely absorbed, 1-2 min.
3. Stir 1 cup of the hot broth mixture and continue to simmer, stirring every few min, until the liquid is absorbed and the bottom of the pan is almost dry, 7-9 min.
4. Stir in 1/2 cup more broth mixture every few min as needed to keep the pan bottom from drying out (you may not need all of the broth mixture) and cook, stirring often, until the rice is al dente, 10-12 min.
5. Vigorously stir in the remaining 1 TBSP butter until melted, then gently fold in the shrimp, scallops, tomato, and basil. Cover the skillet, reduce the heat to low, and cool until the seafood is cooked through, 6-8 min, stirring once halfway though cooking. Season with salt and pepper to taste, and serve immediately.

There you have it. Try it yourself! I served it with an Artisan multigrain loaf and it was killer. So was the french toast Peter made us for breakfast with the same bread.

I think I forgot to mention that I went to the Sheryl Crow, Neil Young, and Sarah Mclaughlin concert on Saturday. It was so much fun and I had such a good time. I was there with my step dad, brother, aunt and uncle and Peter. The artists were 'ON' and I couldn't have asked for a better venue than Ambleside Park. Simply spectacular. We didn't take many photos but here is one to set the mood. 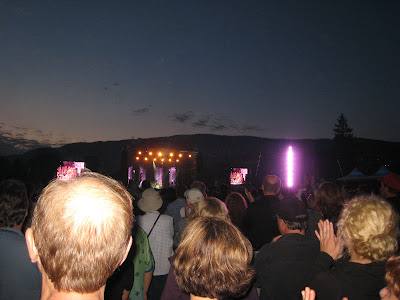 Up for this weekend- Frosty 50km. Should be amazing and I do hope the weather holds because the views (I've been told) are amazing. This will be a good race for me to do leading up to Mountain Masochist. Tamsin Anstey is coming down to Mountain Masochist as well as Frosty. I suspect I will be chasing her down in both races, so it will be good practice. We are both hoping to gain a spot into Western states if we coming first and second female at Masochist. As long as were in the top 2, we will both be happy campers.

See you in the trails!
Posted by Nicola Gildersleeve at 11:12 AM