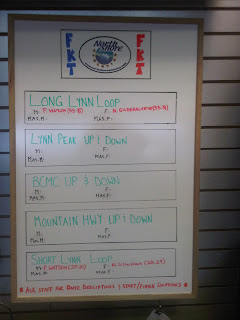 My boyfriend and partner in crime, Peter, has been working his ass off the last couple of months getting our local running shop, North Shore Athletics, back up and running.  It went into receivership a few months ago and to make a long story short, he worked there for 10 years, there was a hiccup with the owner, Peter left, just shy of a year later the store went bankrupt, and eventually was bought by new owners (Kintec) who hired Peter back as the manager (smart owners!) and kept the NSA name.

I think he and his co-workers have done an amazing job thus far and it is so great to get back in the place where my running career began. Peter has thought up a few neat ideas and one of them has been the local FKT's.

What is an FKT you say? Well, FKT stands for 'fastest known time' and essentially it's a speed record. There is an official website where people can post their FKT's for well known routes such as the West Coast  and Juan de Fuca Trails. Together, we have decided on a few local routes that we love and have posted them on a white board in the store. We have 5 routes right now but we do foresee this list growing in the future. This is totally done on the honor system and meant to be something fun for the running community to take part in and perhaps mix up their speed training routines. I should also mention that there are spots for both Female/Male and Masters Female/Male FKT times. There are also descriptions of the routes in the store where you can get exact start and finish locations for each route.

Peter and I have always run together but in the last couple of years that has fallen off as he took an extended break from running after completing the Western States 100 in 2010. We used to do the majority of our speed work together an often got into a cat and mouse kind of game together out on the trail. Since his leave of absence from our training partnership I have done little to no speed training and it's so nice to be doing this again. However, I am not very motivated by intervals at the track so these FKT's are a pretty fun way to get in some speed/tempo work. We threw down the first Short Lynn Loop one's today but both of us are recovering from being sick so I think these times might be a bit soft....good starting point for some challengers!!!!!

I look forward to seeing these times fall and to see who comes out to challenge them!

See you in the trails...
Posted by Nicola Gildersleeve at 10:51 AM No comments:

All I can say about this experience is: AH POOP!

I had a pretty relaxing week leading up to the race and was excited to run the first ever Meet Your Maker 50 miler in Whistler. After reading the course description I just couldn't imagine not doing it. Peter was also doing a leg on an NSA/Kintec relay team so we both would get to run. We packed up, drove to Squamish and did a climb up the Chief, which was really nice as I hadn't been climbing in forever. After that we went up for package pick-up and got to chit chat with some friends before the pre-race dinner at Merlin's Bar. Totally tasty. Then quickly off to bed.

Morning came way too soon with a 4am alarm and a 6am start time. The start was a bit chilly and was eager to get going. I started out with Kathy McKay and Marieve Legrand but quickly backed off the pace just a tad as I new this was going to be a long day. Within no time Kathy was out of sight and I wouldn't see her again until I watched her come into the finish, 1st female! Before long I was running with Marieve and we stayed within eye sight of each other for quite a long time along Comfortably Numb. I love Marieve, she is such a rockstar and it is always such a pleasure to be running with her. Comfortably Numb is one of my favorite running trails. I ran the entire thing hoping that it wasn't going to tire me out too much.

My body felt a bit off from the get go. My quads felt tight and I developed a pinch in my groin which I could feel all the way along comfortably numb. At this point my mind started to get a bit negative but I brought music which seemed to defuse the negativity. I reached the 3rd aid station at base 2 of Blackcomb and saw Peter where he aided me by filling up my camelbak as I darted off to the porta-potty. I didn't say a whole lot to him as I wasn't in the best mood and quickly left. I felt pretty bad as he had just ran 30km and I didn't even think to ask "how was your day" until I had left the aid station. I moved pretty well up Blackcomb and ran everything that I could. There was quite a bit of hiking which helped alleviate the groin discomfort. You start the climb with a straight up grunt up the ski hill which then switches into a gradual and mostly runnable climb up the gravel access roads. Once we got to the 7th Heaven chair we started hiking up a beautiful single track trail which then switched into a stunning and scenic rocky train that took us all the way to the Peak to Peak chair. There were so many hikers but they were all so incredibly polite. They'd see me coming and yell "runner" and then step aside so I could pass. Every single person I saw did that. It was unreal. Then I got the most warm welcome into the aid station as everyone was cheering at the top of their lungs.

I was pretty stoked to be at the top (in 2nd place for the females) and after a quick stop at the aid station I eagerly boarded the Peak 2 Peak gondola. There was one other couple and a family of 4 in their with me and I think they must have thought I was pretty weird as I kept moving (mostly stretching) the entire time, while everyone else sat down and relaxed. I had been wondering how the following descent down Whistler was going to feel after having stopped running 15 minutes prior and I can tell you, pretty much from step one- it felt awful. The trail was very steep and with every step it felt as though someone was stabbing the sides of my knees. Now, I love downhills, they are why I run and I was pretty disappointed to be in so much pain. I was forced to walk a bunch of it and spent the entire timer wondering if I should continue on. I got to the aid station at the bottom of the hill and quickly told peter that my knees were in a lot of pain. He suggested I stretch them and keep moving. I had been stretching my ITB and hips on the gondola but that didn't seem to do a whole lot so I think I just grabbed some water, food and fled. Peter told me it was only 8km to the next aid station so not too far.

After about 1 km the pain went from pretty painful to debilitating and I could no longer run. In hind sight I should have gone back to the last aid and called it a day but I was hopeful that maybe I could massage it out and it would come around. In the end, it never did and I just walked it out to the next aid station, which ended up being 12km instead of 8km. It's a shame because that section of trail really suited my running style. It was hard watching everyone go past and asking what was wrong. I definitely had a few teary moments but in the end, what could I do. I dropped out with only 19km to go but it was a pain I could not push through and I am not one to resort to pain killers. At the beginning walking didn't hurt and I was enjoying the hike but by the end of the 12km, I could hardly walk without pain. Thankfully Peter had been told about my state and came out to find me on the trail so I had someone to walk with for the last km or so.

In the game of utlra running-you win some and you lose some. Some days your body feels great and some days it doesn't. I could tell I was probably still fatigued from Transrockies and the training I did after it as I kept nearly biffing it repeatedly in the first few hours (a sign of fatigue). I was still totally stoked to have run 60km because the terrain was just stunning and so fun. I would most definitely come back and do this race again and would recommend it to anyone. It is a challenging course and the finish times are much longer than most 50 milers but the trails and the scenery are next to none. AND you get to ride in a gondola (which I am still debating whether or not that is a good thing)!

Huge congrats to Kathy for such a steller performance. I am so impressed and inspired by your achievement considering you had also just raced transrockies and it was your first 50 miler! Congrats to everyone else who was doing this as their first ever 50 miler- you chose a gooder! Thank you to the race directors, volunteers, and NSA/Kintec for the entry. There were so many amazing volunteers out on the course marshalling and manning aid stations. There is no doubt that I will be back!

See you in the trails...but maybe not this week :)