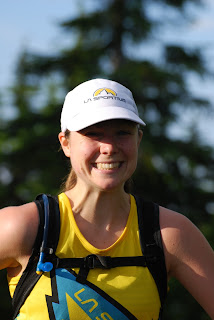 (Me, all smiles having reached the top of Black Mountain. Photo By: Randy Atkinson)

When I first started "racing" or entering races, I used to start out pretty conservatively because I had no clue how to race as well as no expectations. I'd start out conservatively and then pick it up from there if I felt good, which I often did. AND I HAD A BLAST! I also performed well. Somewhere along the way however, I started to push a bit more from the start and co-incidentally this is around the time when  racing became not as much fun. I have still done well but my mental state throughout the races has been pretty shitty.

My last 2 races, Knee Knacker 50km last weekend and 5 peaks 14km today (the following weekend) I started out fairly easy. In fact today, I seated myself in the 3rd heat which meant that I left the starting gates 1-2 minutes after the lead packs.When you start a bit further back, you don't get caught up in the pack. Also, sometimes you end up going a bit slower than normal and if the trail narrows and you get stuck behind people. This isn't such a bad thing at the beginning. If it's too painfully slow of course you politely pass and carry on. Today I just gained momentum and had legs to run every single hill. Pretty much everyone around me (men and women) were walking the ups and I wouldn't blame them, the trail was like stairs but for some reason I just didn't stop running. I eventually caught up to the lead female with 2 km to go and hammered it on home. Thanks "Money" for getting me into the race!

I had SO MUCH FUN running today. My body didn't feel 100% going into (so I had low expectations) it but while I was running I felt like Heman! It was great. It feels so much better passing people at the end than being passed and I think there is something to this whole starting out slow thing. So far it seems to be working and racing has become super fun again.

Woot Woot. Good luck to everyone racing this weekend. There's a lot of people both biking and running 100 miles!

See you on the trails!


Posted by Nicola Gildersleeve at 5:22 PM No comments: 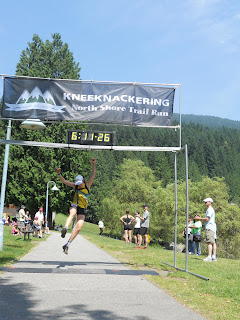 I DID IT!!!!! FOR THE FIRST TIME IN 4 YEARS, I GOT TO FINISH KNEE KNACKER!!! I was starting to believe I was cursed considering the last 3 years I have entered but injuries in June have kept me away. I told myself not to enter this year but I just couldn't stay away, it truly is my all time favorite race and not simply because it was my first ultra. However, I was just getting over another foot injury that occurred in mid may (while I was in Australia) and kept me out till mid June. After a month of not running. I knew I had lost a lot of fitness because running even 30 minutes or the minor-est incline felt like I was running at 10,000ft. Some serious oxygen deprivation going on! But, I got back to it and did 3 interesting adventures: 1) Rode my mtn bike from North Van to Squamish (2) Hiked Hanes Valley from Grouse to Lynn Headwaters and (3) a 2 hour road/trail run. (without foot pain) Ha, so not too much serious training going on. 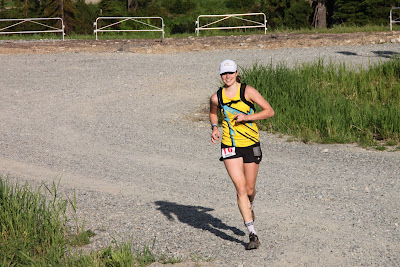 (Coming into Cypress, happy as a clam! Photo by: Ken Blowey)

Physically, I knew finishing would be possible, however competing would be out of the question, or so I thought. I did quite a few fast Grouse Grinds with Peter which kept my uphill form in good shape but I hadn't run downhill in ages. I simply thought I was going out to enjoy running the Baden Powell Trail. Which I did... In the morning I was a bundle of joy. So happy to be at that start line with so many awesome friends and familiar faces. I started super slow. People were commenting on why I was so far back. I told them that was because that's where the party's at, and that no ones having fun at the front! My Transrockies Run (TRR) partner, Shauna, and I ran together for the first bit and shot the shit and had a blast. We discussed our TRR running outfits and got fashion ideas from other racers before deciding it would be best just to run in our underwear. Then we started to ascend and I just put my head down and got into a flow, naturally right behind Sasha Brown. Every year that I have run this race so has Sasha. She is a great hill climber and somehow I just seem to always tuck in right behind her going up Black Mountain. The day was amazing, just so clear and warm. The view at the Bluffs was sensational. Tons of mud that i took my time to dodge and only minor amounts of snow.

Before I knew it I was coming into the first major aid station of the day- Cypress Mountain. I immediately looked for Peter who had some gels for me and as I re-filled my water he put drops of Elite (electrolye solution) in my h20 bladder. Apparently at this point the leaders were 10 or so minutes ahead and I had no idea what position I was in, which was perfectly fine with me. Again, goal was to finish. I took my time through the Cypress section, going at a consistent pace, not pushing, just letting the body do it's thing, whatever that was to be. I felt like a was tip toeing my way down the cross country trails and the Hollyburn shoot but still managed to pass a couple of people. Last year, I ended up cranking my ankle coming down Hollyburn and had to pull out so I did not want to have that happen again. Normally, when I am fit and trained up, this is the section I look forward to all race because it's just so fun to bomb down. I came into Cleveland Damn feeling pretty spent. My energy level was fine but my legs just felt like jelly, which is to be expected with no downhill training whatsoever! Someone with a clipboard told me I was in 5th, which was a pleasant surprise and 4th (Marieve) was just up ahead of me. She left the aid station moments before me so I had her in sight the majority of the way up Nancy Greene. Marieve and I are friends and I was dying to catch up with her for some companionship. My body wanted to walk so bad but my mind just told itself to run, so I did. Eventually I caught up to her and we chatted all the way up the the top of the climb.

Before long I was running by myself. Apparently 4th place was a girl named Astrid. The only person I saw throughout the Grouse section was Curb Ivanic. Again, I really took my time through here, walking a lot of the uphills and taking my time on the downs. I'm pretty sure I passed Astrid at Mtn Hwy, but wasn't really sure. Not long after I ran into Kerry Ward and Ellie Greenwood who were pre-sweeping the whole course. It was great bumping into them and we chatted for a bit. They told me I was in 3rd, so I figured it must have been Astrid back there. I couldn't believe I was in 3rd and only a couple minutes behind Brooke. Clearly this whole not racing thing was working out for me. I saw Peter again at the Gazebo aid station and we filled up my Bladder. I couldn't believe it was already 3/4's the way done. I couldn't believe on so little training my body was still moving the way it was. I made my way to Hyannis and was so happy to see my good friend/client Irene! She was volunteering and I gave her a big hug and got soaked down with the sponges. Oh lord those felt great! I think someone told me that Brooke was about 4-5 minutes ahead and I think I made some comment like "Good, she can stay there!" as I really had no interest in racing. Right after that I saw my good friend Tom Craik with his little girl and she gave me the greatest high 5 ever!!!!

On and on I went, every step getting me closer to the finish. After reaching the top of Seymour grind I knew it was pretty much all downhill from there. Body was still feeling good but my right quad was starting to feel really tight and I knew pushing it into the finish was just not a good idea so I continued to go at the same consistent pace I had been going all day. Again, at the last aid station someone told me Brooke was 2 minutes ahead and unless she actually came into my line of sight, I wasn't going to do anything about that. I don't think anyone can really understand how excited I was to finish on this day. It had been 3 years since I was healthy enough to finish. This was a race I wanted to run every year since my first and it was starting to feel like I was cursed. Well, on this day, I broke it and prove to myself that miracles can happen! I am not sure how I ended up 3rd but I sure do feel embarrassed for sandbagging to all those people I talked to before the race. But its funny you know, I told people I was just going to have fun and not race and to be honest, that is exactly what I did. I finished in a time of 6:11, behind 2 ladies that I highly respect.

Congrats to everyone who finished and to all the volunteers and race organizers who put in so many hours making this event my favorite of all time. Last but not least, thanks to Peter for being my little lucky charm all day and having someone to look forward to seeing at the finish!
Gear:
- La Sportiva headsweats Hat
- La Sportiva Green Layer Jersey
- Steed Cycles Defeet socks (no blisters)
- La Sportiva Crosslites