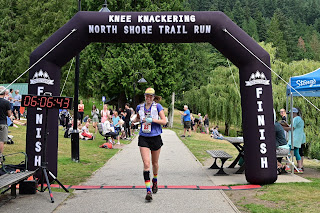 
Every year the Knee Knacker is my big goal for the year. It’s a race where I can test myself and I get a good gauge of my fitness level. Having done it 7 times now, every year has been different and it’s become a yearly pilgrimage.

After being sidelined in the fall with ITB syndrome, I really took my time building back up towards this event. I have planned nothing after it race wise so I could just focus on building back up healthy towards Knee Knacker.

I chose to do 3 x 25k races this year in my build up: Nimble Bear (Kelowna), The Cumby (Cumberland), and The Kusam Klimb (Sayward, Van Isle). Those were success’s in their own right having placed 3rd, 1st and 2nd in that order. Knee Knacker was going to be a celebration for all the training and I think I did a good job getting to the start line healthy and in good enough shape to try hard. 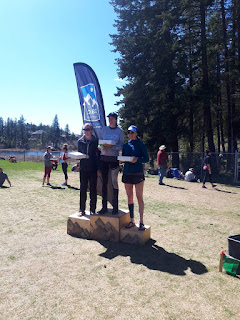 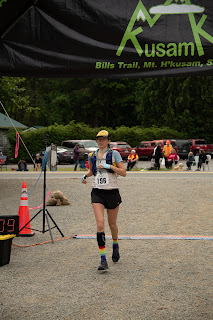 
My goal for this race is to always go out and do my best. My second goal which was time based was to go sub-6 hrs. I’ve gone sub 6 in three of my now seven finishes so it’s always something fun to shoot for.

I met my friends Alexa and Matt at our friend Dennis’s house at 5am. We were then all going to carpool together. At 5am, I get there, then Matt and lex get there but Dennis is no where to be found. I go and knock on the door and no one answers. Alexa calls Dennis (10x) and he doesn’t answer. I knock again and lex knocks and no one answers. At 5:15 we had to leave without Dennis.

We didn’t have too much time before the start, just enough to check in, stand in the porta potty line and go for a quick 2 minute warm up. There were some fast looking people at the start doing strides! With about 5 minutes before 6am, DENNIS shows up!! He made it. Turns out he woke up at 5:35 and somehow got all his shit together and got there before 6.

I decided not to wear a watch for the race. I haven't been training with or done any of my 3 races using a watch and I feel like I've been very intuitive with my eating and pacing. I was confident that it wasn't necessary for me to have on race day. It's been quite liberating I must say.

I always break this race up into sections: (1) Start to Cypress (2) Cypress to Cleveland dam (3) Grouse to LSCR (4) LSCR to the finish. I have different strategies for all sections. I felt like dorking out here so I have recorded all my splits for all the 4 sections through the years.

Climb up to Black Mountain: This is one of my trickiest sections because climbing/hills are my biggest weakness. I tend to be a bit conservative so that I don’t blow up later. I find the splits interesting because the year I came 2nd and 14th overall (2007) I was the 54th person to Cypress. So for me, starting off “slow” pays off later. To be honest, I don’t really feel like I am going slow, I am pretty much trying to go a pace that feels manageable. In the end, because I am not a strong hill climber I don’t get up there at the front of the field - but I make up for it later.

This year I felt good going up the climb, other than a wasp sting in the first 30 minutes of the race. I settled into a nice pace and tried to stay consistent.

Cypress to Cleveland Dam: This section is all about fun for me and not blowing up the quads. There’s 2 parts to this section: (1) the trail right after the cypress aid station that takes you over to Hollyburn (2) the descent to the hollyburn shoot to Cleveland dam. For the first section it’s all about staying consistent. It’s really hard to find a good flow through here. I really love this section cause there’s been very little work done to the trail. The bridges haven’t been maintained and its really rooty and muddy. It’s what trail running used to be before they started smoothing everything out and putting in boardwalks and stairs. When you get to the top of that section and take that right turn and its all whoops and smiles from me because it’s officially all downhill (except for those stairs near brothers creek). When I was in my early 20’s I would just fucking hammer this descent. I can’t quite describe it - I used to just bomb downhill. I’ve since suffered a couple bad ankle sprains and I don’t quite hammer like than anymore. I’m excited to be back living on the Shore and can work on gaining back that gusto and building up my quads to be able to hammer once again.

This year I ran efficiently. I remember thinking "man, I used to just bomb down here" fully knowing that I wasn't running like I used to. However, I think I was doing the best I could with the fitness I had and knew my pacing was good and I was leaving a bit in the tank for Grouse.

The next section is Grouse to LSCR. This is probably the most underrated section but it really requires the most attention. If you were to go for a run on this section of the Baden Powell after you climb the initial 10-15 min it’s pretty runnable. There are also a lot of roots and eroded parts and it's helpful to know whether to go low or stay high. If you haven’t left anything in the tank this section will eat you alive. I found this out the first year I did this race and as you can see, came back in 2007 and 2008 and improved greatly. I spent a lot of my training trying to master this section.

I'm a bit shocked that this year was my 2nd slowest grouse split cause I felt like I ran pretty good through here, sigh. I managed to pass 14 people so that is positive. I started cramping in this section last year so maybe I was taking it easier subconsciously or I'm just slower now ha. I can't remember what year it was but I BL quad cramped at the top of Varley trail so this year I purposely walked slowly up that mini climb and even for 30 seconds after it and began running again once I was in the clear ha.

I'd like to think I still have a PB in me but it's hard to say. I'd love to really nail the training and get back to KK specific workouts and see what this body is capable of. It's been years since I really "trained" for the Knee Knacker. I've definitely run in preparation but training for it is a different thing. I genuinely enjoy every section of this course. I get excited to run it because the trails are just so damn fun. The community surrounding this event is just so magical and it's such a joy to come back and race year after year.

What's up next: I'd like to spend a chunk of time exploring the rockies! I'm eyeing a race at the end of September in Golden and then I have put my name in for the HURT 100 lottery!

Posted by Nicola Gildersleeve at 9:15 AM