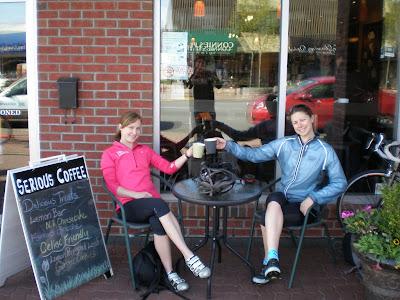 (A break at serious coffee in Sidney, Victoria on our way to the ferry)

I had a few goals I wanted to accomplish this summer and one of those was to visit Salt Spring Island (as well as all the other gulf islands). When I arrived in Victoria on Friday afternoon I noticed that the ferry to Salt Spring was right in the same terminal.

My friend and I had all Sunday to play and I asked her if she wanted to bike to Salt Spring. Not having been there since she was in grade 2, she nicely obliged. I packed up my entire big back pack because I was leaving that night for Vancouver. It sat on my back for the entire trip. I tried to leave it at a small restaurant near the ferry but they weren't so keen on the idea.

We began the adventure at 8:30am and set out on our bikes, down the highway towards the ferry. The highway riding was nice, large shoulder, and there weren't too many hills. The total distance from her place to the ferry is 19 miles. Fawn suggested we make a pit stop into Sidney (5km from the ferry) as we left a bit early and had some time to kill. She had been dying to take me to 'Serious Coffee' all week and we found one there. I ordered an americano and paired it with a power cookie I had stashed away in my bag. We sat outside and basked in the glorious weather that was starting to roll on through.

We didn't have long to wait at the Ferry and boarded within 15 minutes of arrival. The ferry is small, which is to be expected because the population on Salt Spring represents just that. We walked upstairs to the 'deck' and laid down and soaked up the heat of the sun. 35 minutes later we were in Salt Spring!!!! I must tell you, I was beyond excited. We were told we had to go to a town called Ganges, which was 13km from the ferry. We asked a guy off the ferry where we had to go and he said left and worriedly told us there was a huge hill we had to bike up. I wasn't all that nervous as North Vancouver is ridiculously hill and people tend to underestimate the power/length of a real hill. 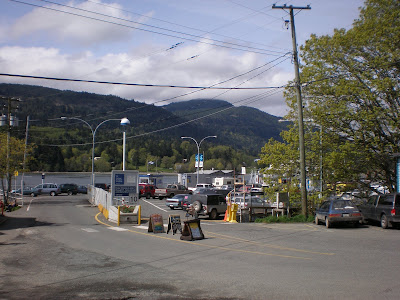 (The ferry terminal on the Salt Spring side) 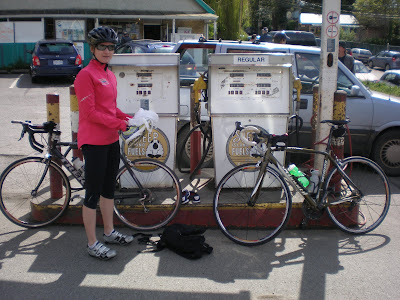 (the first gas station off the ferry. I thought by the look of it that it was no longer in service, but those pumps work baby!)

The heat of the sun started to shine through and I had to immediately de-layer into a t-shirt. The country side was stunning and we passed by many wineries and other local houses that were selling eggs and organic beef and poultry. The 'hill' we had to climb turned out to be unimpressive, which I was happy about because the pack was weighing m down a bit. But, I was not complaining, I could use the extra weight to build some more string in these here legs. It didn't take us long to get to Ganges and we rolled in to a small festival with a live band and the smell of hot dogs. As hungry as I was we decided to take a friends advice and headed straight to the Tree House cafe. This town had everything one would need- specialty bakeries, ice cream shops, amazing restaurants, coffee shops, and a local grocery store. Every Saturday there is a local Farmer's Market and I would love to come back for that, as Salt Spring is known for their artisan's. 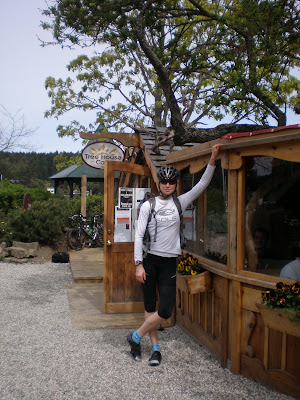 Lunch was ever so scrumptious. I had the chicken cranberry sandwich, served on a fluffy and light ciabatta bun. The chicken was freshly BBQ'd and the cranberry sauce was homemade and sooooo good. Along side it they served up a simple but yummy spinach salad, no fries offered here. We met a really nice couple from Bellingham and they gave me a really good idea for another biking adventure (Vancouver, Salt Spring, Bellingham, to my cabin in Glacier). I had to catch the 5pm ferry back to Vancouver, so we headed very quickly after lunch. We had just enough time to tour around the town and get back on the saddle. The ride back was really quick and we had about 45 minutes to kill until the next ferry came. Fortunately, there were a few small shops to browse through. I picked up a green Matt and Nat Wallet that just jumped out at me. I love green bags and purses, this wallet seemed to fit the bill nicely (no pun intended).

The ferry ride back was again- stunning. The islands are all lined with gorgeous arbutus trees and all the cabins have so much character. This is a place I would like to come back to sometime soon in the near future. I said my goodbye's to Fawn and boarded the ferry back home to Vancouver. My friend Leslie's boyfriend came and picked me up from the ferry and drove me back to my car. I was a bit nervous about the drive back but I followed Leslie's directions to a T and managed to get home safe and sound.

To end off a great weekend, Peter came home early from his ski touring trip! We headed down to Taylor's crossing for 1/2 price pizza and caught up over a Red Truck beer.
Posted by Nicola Gildersleeve at 9:06 AM